The Chinese buying spree of residential, commercial and industrial property in the U.S. may already be taking a hit. 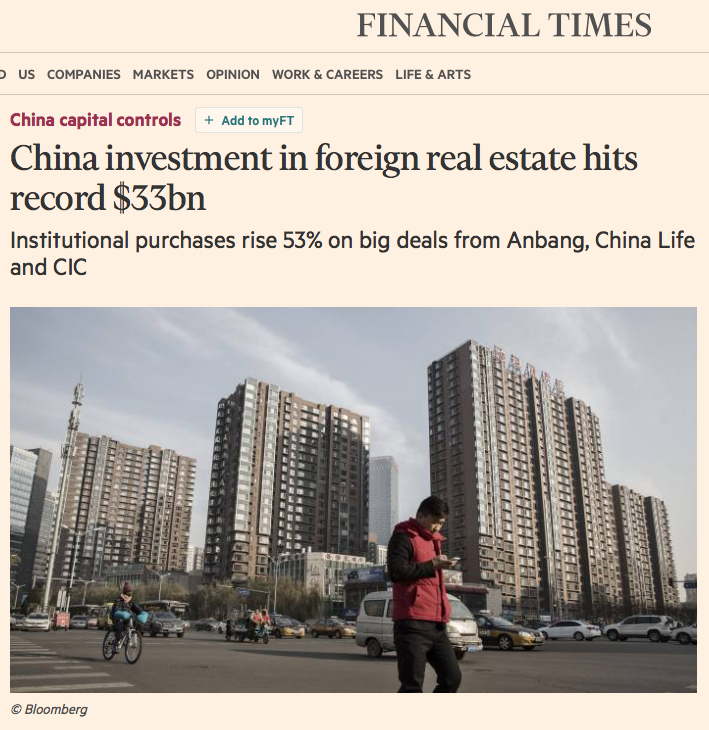 Bloomberg reports that “China’s escalating crackdown on capital outflows is sending shudders through property markets around the world,” noting that from London to Silicon Valley to Sydney come alarming signs of a slowdown in inquiries from Chinese investors.

All of this stems from a statement from China’s State Administration of Foreign Exchange on Dec. 31 declaring that all buyers of foreign exchange must now sign a pledge that they won’t use their $50,000 quotas for offshore property investment. Violators will be added to a government watch list, denied access to foreign currency for three years, and subjected to money-laundering investigations.

The announcement is important given China’s voracious appetite for global real estate. The nation’s investment in foreign real estate hit a record $33 billion in 2016 as Chinese buyers snapped up office buildings, hotels and residential land. That marked an increase of more than 50 percent from the previous year, according to data from JLL and reported by the Financial Times.

The most popular investment destination for China: the United States, drawing $14.3 billion of investment. And what areas are expected to draw the most interest in 2017?

And that’s in sharp contrast to the high-risk luxury developments in Manhattan that attracted Chinese investors in 2016, according to the Journal, which adds that Chinese buyers are now thinking more strategically about the U.S. market – “and that means shying away from the high-end property market.”