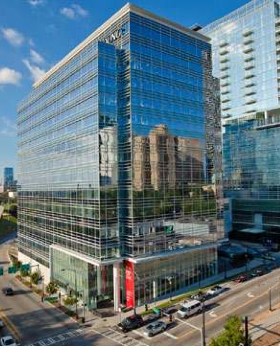 Cushman & Wakefield is a longtime tenant of 55 Allen Plaza, and the Atlanta office of the firm co-markets and leases the building with Lincoln.

Connecture’s lease marks another significant moment in the improvement of 55 Allen Plaza that began when Lincoln purchased the building on behalf of a pension fund client in 2011. New building amenities and increased operational efficiencies have resulted in several industry awards. Also, leasing efforts in 2013 have successfully resulted in more than 53,000 square feet of leases. In addition to Connecture, Lincoln executed leases to top-notch tenants like Doner Partners, Fogle Law Firm and Ernst & Young.

The Bread Box, a café that serves breakfast, lunch and Starbucks coffee and also features fresh-baked bread, has opened in the building. Carlyle’s Catering, a well-known Atlanta-based firm, operates the café.

Furthermore, 55 Allen Plaza achieved LEED Gold Certification last year and was recognized in July of this year by the Atlanta Better Buildings Challenge for achieving a 20 percent reduction in energy and water consumption. The building also has been designated a BOMA 360 Performance Building by the Building Owners and Managers Association (BOMA) International. The BOMA 360 Performance Program recognizes commercial properties that demonstrate best practices in building operations and management. Fewer than 50 buildings in Georgia have earned the designation.

“I could not be prouder of the effort our team has put into 55 Allen Plaza and of the results we have achieved,” Bartlett said. “The advances have been remarkable, and 55 Allen is undoubtedly a best-in-class asset within the Downtown and Midtown office market.”

Overlooking the Downtown Connector on downtown Atlanta’s northern edge, 55 Allen Plaza provides tenants with access to all of Atlanta’s sub-markets. As part of the Allen Plaza mixed-use development, the building is surrounded by amenities including restaurants, the W-Atlanta Downtown Hotel & Residences, retail and Centennial Olympic Park. Prominent tenants in the building, which opened in 2007, also include Ernst & Young, Skanska and the design firm ASD.