With the holidays in the rear-view mirror and 2014 in full swing, we at Lincoln Property Company Southeast are extremely excited about the year ahead. We expect our third-party services to be in high demand as commercial real estate markets across the South continue to improve and the economy grows stronger.

The office markets of Atlanta, Orlando and South Florida ended 2013 with significant momentum. Vacancy rates dipped nearly a full percentage point in all three markets during the year. Orlando had the lowest vacancy rate at year’s end (12.1 percent), but Atlanta and South Florida actually experienced steeper drops (.9 of a percentage point each) over the course of 2013.

Additionally, job markets in the South remain on an upward trajectory. All six Southern states that comprise the Federal Reserve Bank of Atlanta’s district saw payrolls grow in November, the most recent month for which data is available. Georgia led the way with 14,500 new payrolls. Approximately one-third of those jobs were in the construction industry, and another third were in the transportation and warehousing sector, according to the Federal Reserve Bank of Atlanta.

Unfortunately, the monthly Southeast Purchasing Managers Index (PMI), which evaluates the strength of the manufacturing industry in the area covering Alabama, Florida, Georgia, Louisiana, Mississippi and Tennessee, measured 48.4 in December. A score above 50 means the sector is expanding, while one below the number indicates it’s contracting. However, the index registered above 50 in 10 months during 2013, and one analyst sees ample cause for optimism.

“It appears unlikely that December’s fall in regional new orders and production is the beginning of a trend,” writes Troy Balthrop, a regional economic information network analyst for the Federal Reserve Bank of Atlanta. “In addition, with the employment index expanding and the level of optimism for future production rising, conditions appear favorable that the Southeast PMI will rebound in January.”

These trends are illuminated in more detail in the three infographics below. 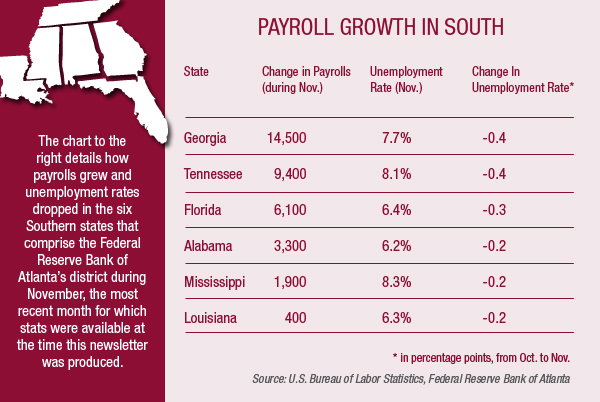 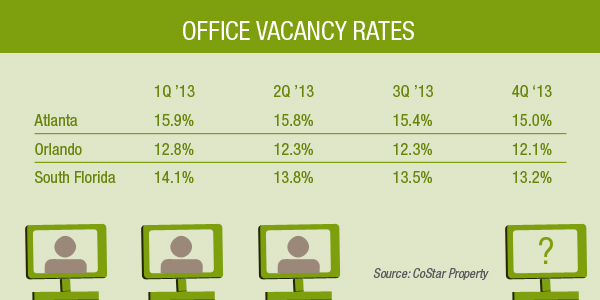 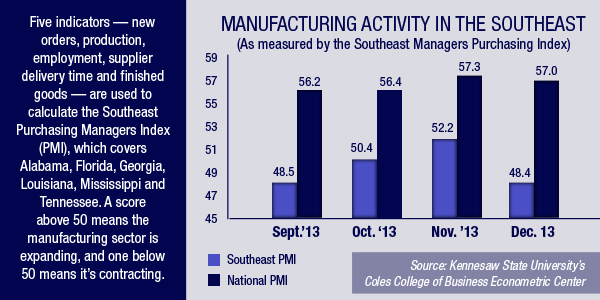