Link in to Lincoln: May Update on the South

The South’s manufacturing sector continued its surge in April, as indicated by a key economic measurement reaching a two-year high. The monthly Southeast Purchasing Managers Index (PMI), which evaluates the strength of the manufacturing industry in the area covering Alabama, Florida, Georgia, Louisiana, Mississippi and Tennessee, came in at 63.2 last month. (A score above 50 means the sector is expanding, while one below the number indicates it’s contracting.)

It gets better: Sifting through the report on the SouthPoint blog, Troy Balthrop, an analyst in the Federal Reserve Bank of Atlanta’s Nashville branch, finds reason to believe the spike is not a fluke, but an indication that manufacturing in the Southeast could sizzle through the summer.

The PMI reading was one of several encouraging bits of economic news to emerge from the South recently. Although Orlando saw a slight uptick in its industrial vacancy rate in the first quarter, both Atlanta and South Florida experienced declines, and the rates in all three metro areas were noticeably lower at the end of March than they were one year earlier.

Finally, the median sales prices of existing single-family homes in Atlanta, Miami and Orlando jumped significantly in the first quarter on a year-over-year basis. Atlanta had the biggest increase of the three, with its median sales price rising by 23.3 percent during that timeframe. Miami experienced the smallest spike, but still registered an increase of 15.1 percent. The United States as a whole and the South as a region saw their median prices rise by 8.6 percent and 7.7 percent, respectively. 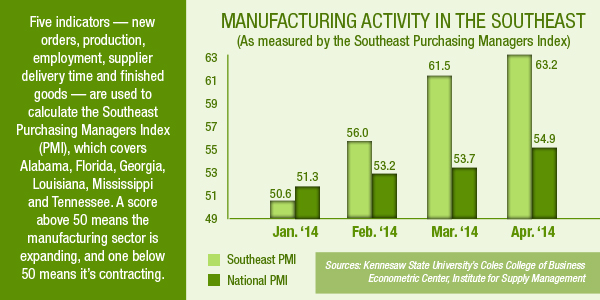 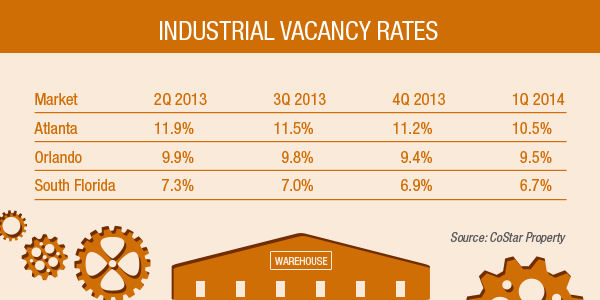 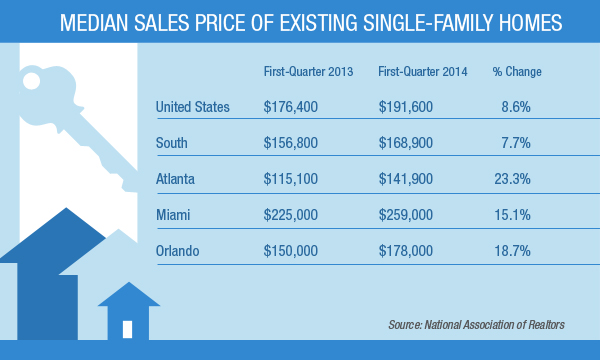