Link in to Lincoln: October Update on the South

With the end of 2014 on the horizon, office vacancy rates in the South continue to shrink, a sure sign that the region’s economy is picking up steam. Metro Atlanta’s vacancy rate was 14.3 percent at the conclusion of the third quarter, a full percentage point lower than where it stood nine months earlier, according to CoStar. In South Florida, the rate has experienced a similarly steady dip, dropping to 12.6 percent at the end of September. Metro Orlando’s vacancy rate hasn’t exhibited the same consistent decline, but it did drop from the second to the third quarter.

The South also witnessed a healthy uptick in privately owned housing starts last month. Compared to August, such starts increased 4.2 percent to a seasonally adjusted annual rate of 491,000 in the South in September, according to a report from the U.S. Census Bureau and the U.S. Department of Housing and Urban Development. The figure also represents a nearly 17 percent increase from September 2013.

At the same time the region’s commercial and residential real estate markets are showing real signs of improvement, manufacturing activity in the South continues to grow. The Southeast Purchasing Managers Index (PMI), which measures the strength of the manufacturing sector in a six-state area that includes Florida and Georgia, came in at 55.0 in September. (A score above 50 means the sector is expanding, while one below the number indicates it’s contracting.) The index has been above 50 every month this year.

The data discussed above is illuminated in more detail in the infographics below. 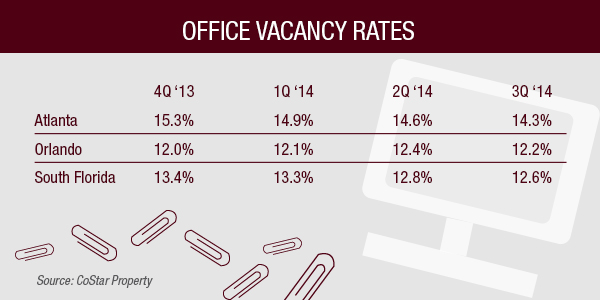 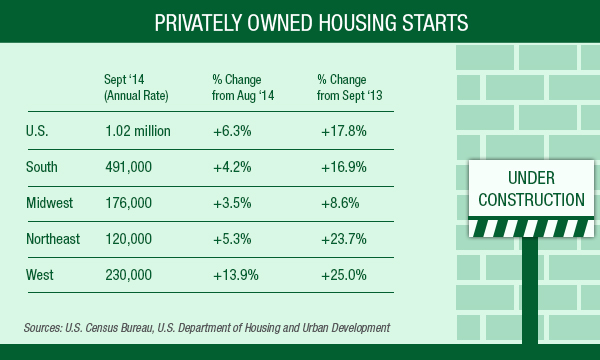 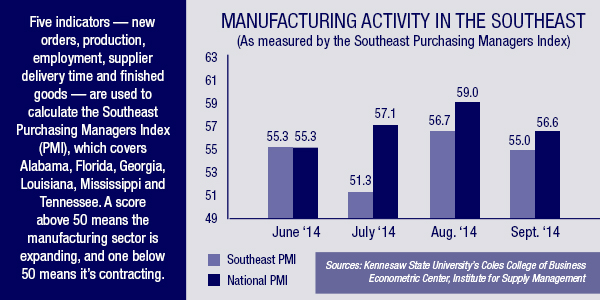