Link in to Lincoln: October Update on the South

Shrinking office vacancy rates and a continued strong performance by the residential housing market. Those were two of the economic trends that unfolded in the South during the late summer and early fall.

In Atlanta, Orlando and South Florida – three of the region’s most important markets – office vacancy rates continued their long-term decline in the third quarter, providing a powerful indicator that business activity and hirings are increasing. The rate in each of those metro areas ended the quarter at least half a percentage point lower than where it stood at the beginning of this year. Atlanta still has the highest office vacancy rate of the three at 15.2 percent, but the metro area also has experienced the steepest decline over the past nine months.

At the same time, the South’s residential housing market continues to exhibit considerable momentum. According to the most recent available data, single-family housing starts in the South reached an annual rate of 330,000 in August, a whopping 20 percent increase from one year earlier.

Existing-home sales in the South slowed in September when compared to August, but were still much higher than one year earlier. Meanwhile, home prices continue to rise. The median home price in the region reached $171,600 in September, an increase of nearly 14 percent from the same month in 2012.

More detail on these trends is presented in the infographics below.

We at Lincoln Property Company Southeast are excited about what these positive economic trends mean for the commercial real estate markets in the South, and we look forward to bringing you more economic data on the region each month. 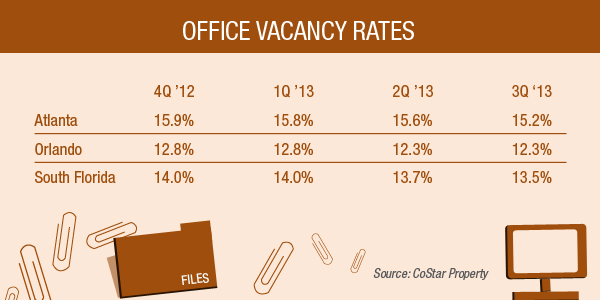