Manufacturing activity in the Southeast grew throughout the summer, but the expansion was particularly noticeable in August. The Southeast Purchasing Managers Index (PMI), which measures the health of the manufacturing sector in a six-state area that includes Florida and Georgia, jumped to 56.7 last month, a 5.4-point increase from July and the index’s highest level since May. (A score above 50 means the sector is expanding, while one below the number shows it’s contracting.)

Although the Southeast PMI remained above 50 in June and July, it did decline when compared to the preceding months, so August’s rise was especially welcome news.

Additionally, 20 percent of Southern employers say they will increase staffing levels in the fourth quarter, while only 6 percent indicate they will reduce employee headcount, according to a new survey from ManpowerGroup. Those numbers have remained fairly steady over recent surveys from the firm.

“During 2014, we have seen incremental growth across industries and regions as employers rebuild their internal teams and implement new operational strategies,” said Jonas Prising, CEO of ManpowerGroup, in a press release. “The lack of any significant peaks or valleys in the survey results reflects a slow and steady climb that continues to define the employment landscape, and an enduring optimism that will carry us into 2015.” 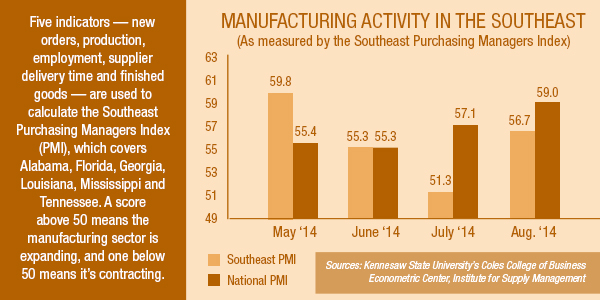 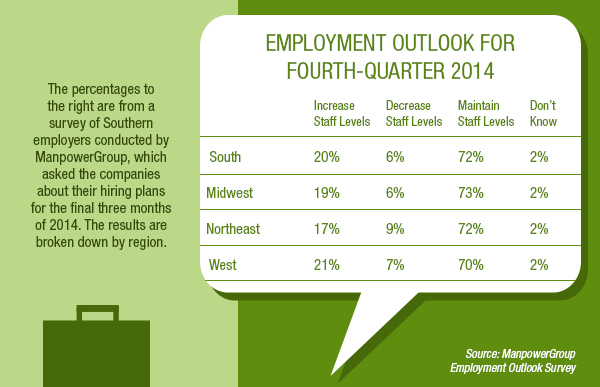