Link in to Lincoln – Update on the South

Despite a recent slowing of its recovery, the South’s economy will gradually pick up steam during the rest of this year.  Long term, the region is poised for above-average growth compared to the rest of the country. That’s the forecast of Moody’s Analytics.

The short-term growth will be fueled by increasing national demand on the region’s manufacturing and distribution industries. As above-average population increases, the relatively low cost of doing business in the area and rising national energy needs will contribute to economic growth in the South long-term.

From 2010 to 2015, the South is projected to experience a 2.5 percent increase in employment. That’s more than the nation as a whole. During the same timeframe, the United States will see a 2.1 percent rise.

Furthermore, “in contrast with the nation as a whole, the regional labor force has grown steadily over the past year, reflecting increasing optimism about job opportunities,” writes Edward Friedman, a director at Moody’s Analytics.

The South’s unemployment rate reached 9.4 percent last year, but that should drop to 9 percent in 2011 and 8.6 percent in 2012. The two-year projection for the national rate, which stood at 9.6 percent in 2010, is exactly the same.

While the region — with the notable exception of Florida — avoided the housing boom and bust experienced by the West, housing prices have still declined in the South. The large number of foreclosures that are still awaiting liquidation coupled with homeowners’ expectations of continuing price declines are the primary culprits of the soft values. However, “it is noteworthy that demographic factors such as population growth and household formation are actually improving in such major states as Florida and Texas, so that once the foreclosure crisis finally ends, the region will be in better position to grow,” Friedman writes.

Approximately 221,000 single-family and 62,000 multi-family construction permits were issued in the South in 2010. By 2012, those numbers are believed to show dramatic increases – projected by Moody’s to increase by about 55 percent and 127 percent, respectively.

The Pros and Cons

Looking ahead, the South’s economy also will benefit from investment in the technology, automotive and steel industries, which will in turn boost the region’s manufacturing sector. Southern ports will reap the benefits of the growth in global trade. According to Moody’s, “The region’s proximity to growing Latin America will remain a source of strength, supporting such industries as electronics, chemicals, petroleum products, agriculture, machinery and metal products,” Friedman writes.

Furthermore, the area’s economic recovery will boost migration to the area.

However, the region does have its economic weaknesses. The South’s workforce quality is still subpar in certain areas, and per capita incomes remain low. Additionally, reductions in defense spending and the globalization of manufacturing could negatively impact the region. 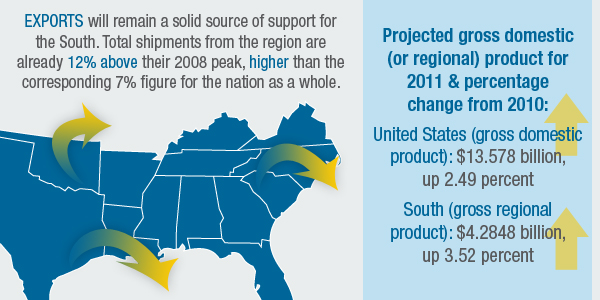