Traffic and road design are the talk of Sandy Springs

Awash in traffic congestion and attracting new companies and homeowners almost daily, Sandy Springs is going back to the drawing board on traffic and road design. 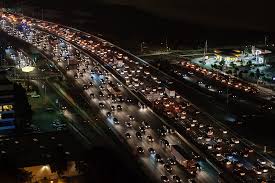 Curbed Atlanta reports that at a recent planning retreat, “the mayor and city council were treated to an array of off-the-wall ideas to combat traffic in the city, with some suggestions trending into the realm of “insane,” as one council member was quoted.

One thing is certain: Change is needed. According to Curbed, from 2004 to 2014 “the amount of people both living and working in Perimeter Center increased 119 percent, which theoretically should help alleviate traffic; but in the same period, the number of people living in Perimeter Center and working elsewhere increased even more — by 153 percent.”

So, what are these radical road designs under consideration? Among them:

• Turning intersections into bridges.
• Adding express lanes on Georgia 400 and I-285.
• Widening Mount Vernon Road near the interchange. But rather than conventional lanes, multi-modal lanes allowing buses and other forms of transit to run freely along the east-west connector between downtown Sandy Springs and the city’s eponymous MARTA station were proposed.
• Building a bridge to connect the UPS world headquarters, the new Mercedes-Benz headquarters and surrounding new residential developments to the North Springs MARTA Station.
• Putting a long-planned dual-roundabout near City Springs and a possible roundabout on Riverside Drive.
• Transforming the busy intersection of Roswell Road and Abernathy Road by building a bridge to allow free flow of traffic. Traffic planners recommended elevating four lanes of Abernathy Road over Roswell Road at a cost of nearly $50 million.

Curbed Atlanta called this last idea “quite possibly the most far-fetched proposal — and the one that met with the most skepticism from the council.”